Today, after seeing John Deming's share of it on Facebook, I listened to Joe Rogan Experience #1494 - Bret Weinstein. In Rogan and Weinstein we clearly have two people of good will attempting to examine the situation that is now unfolding after the death of George Floyd, although Weinstein has past experience that led him to believe something of this nature was in the future.

I think that Weinstein gets the analysis of what is going on right, but some of his solutions seem to be off the mark, reminding me of my impression of Noam Chomsky. I have a few remarks and criticisms; but it will not be a complete summary and I encourage everyone to listen to the podcast.

Weinstein worries that we are headed for civil war. I have this worry as well. The winner-take-all, zero-sum-game of politics has gotten so divided and the stakes have gotten so high that the two sides (recognizing that there are more than two political sides who simply manifest themselves through one or other of the largest two parties) cannot be happily reconciled. Reparations as a remedy for injustices inflicted on black Americans that resulted in poverty and desperation is a controversial topic. Weinstein believes that some adjustments must be made, while disagreeing that reparations are the appropriate the vehicle. 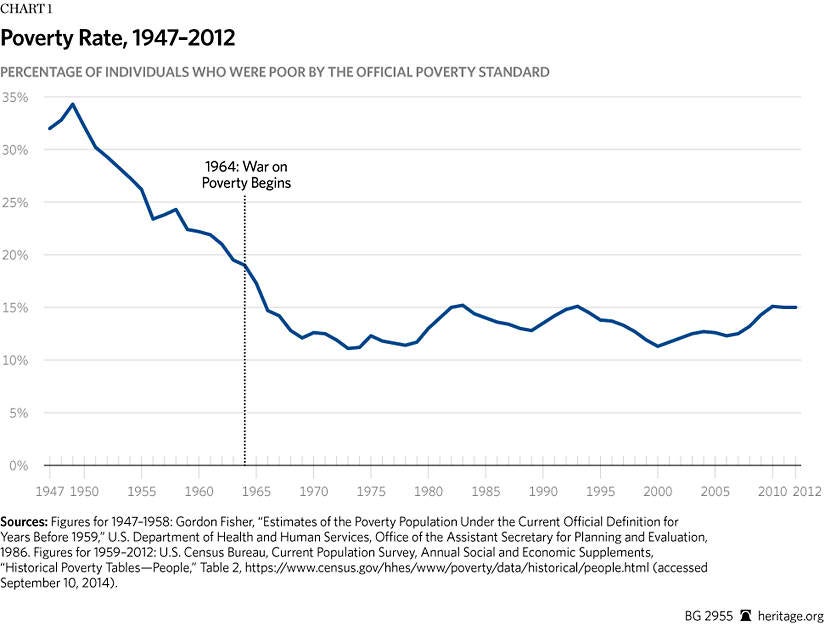 Weinstein, as most progressives, fails to look very deeply into history to identify the source of the problem of black poverty. Yes, there's slavery, and that is over 150 years in the past; but he dates the current deterioration to the Clinton administration, in which he claims Democrats abandoned the position of defending the common man and adopted the Republican model of influence peddling to businesses, albeit "other businesses." This claim ignores the fact that black poverty was declining prior to the War on Poverty but has not had an appreciable improvement since shortly after that legislation was enacted. Ignoring this fact prevents him from offering the possible explanation that incentives for poor people have changed in a way that reduces or even prevents progress. To quote Benjamin Franklin, "I think the best way of doing good to the poor, is not making them easy in poverty, but leading or driving them out of it."

Weinstein exhibits a kind of oppression mentality, arguing the "police brutality is a feature, not a bug" in the sense that powerful elites must use the police to keep the lid on the people who have been cast into misery. Such an idea creates a direct link between the elite and the masses that I doubt exists. Those who work for the state and have "qualified immunity" have little incentive to behave in a civil manner, as a server would toward a customer. I believe the brutality of our system has more to do with perverse incentives than the purposeful oppression of the downtrodden.

Weinstein argues that blacks and Native Americans have been deprived of their software—the culture that guided their lives prior to the devastating experiences of slavery and decimation, respectively. But humans are very flexible, and adapt quite quickly to new environments. Blacks made steady progress over almost a century after slavery, but then became enmeshed in a culture of victimhood and subsidies that were meant to elevate them but largely increased their dependence. Native Americans, on the other hand, were sequestered in reservations that are run in an environment of pure communism. It's no wonder that, while some individuals from both groups have been quite successful, the majority have achieved far less than they might have. It must be emphasized that the problem is not the race or moral fiber of those who are suffering that is the cause—they do not deserve it—the culture, the software, created as a result of the incentive structure, is at fault.

Approaching the halfway point, Weinstein makes a claim that I have never heard before—that black men are leaving their children fatherless because the number of black men in prison produces promiscuity in those remaining. First, he says that when men are in high demand sexually, they tend to be worse actors, which I find plausible. That coupled with the incarceration rate of black men leads to male promiscuity, which I find plausible, and to abandoning their children, which I find less plausible. I think the abandoning occurs because their children are not only shielded from bad outcomes by welfare programs, but may have also be benefited, as these programs may provide income and benefits unavailable to a family that is working poor.

Moving on, Weinstein characterizes the system as "so politically corrupt it's not interested in doing what has to be done." His remedy is to draft two individuals, one center-left and one center-right, and who are "patriotic," "courageous," and "highly capable," run as a team for President and Vice President. The plan is that they will govern by deciding on actions to take together, with the President having override power in case disagreement. This is politics with romance—the idea that we can just pick the right people to be at the top of this massive, intrusive bureaucracy and everything will be fine. In The Open Society and Its Enemies (4th ed., vol 1, p 121), Karl Popper suggests that the proper approach is not to ask "Who should rule?" but to ask "How can we so organize political institutions that bad or incompetent rulers can be prevented from doing too much damage?" Clearly, Weinstein is not asking the question Popper believes is more important. Weinstein goes on to suggest his center-right and center-left picks, Admiral William McRaven (former Navy SEAL and former Chancellor of the University of Texas) and Andrew Yang (former Democrat Presidential candidate and supporter of Universal Basic Income). I will refrain from commenting on these two—two people I would definitely not want to be at the helm when we have political institutions that will not prevent them "from doing too much damage."

A real surprise comes when Weinstein supports the conjecture that SARS-COV-2 leaked from the Chinese virology lab in Wuhan. He was initially persuaded that the virus had occurred naturally, and was transmitted via bats in the Wuhan wet market. However, on investigation Weinstein became skeptical and now believes in the "strong possibility" that the virus was enhanced in the lab. I have to point out that this is the mark of a real scientist—the fact that he changed his mind upon investigating the fit between the theory and the facts.

Finally, Weinstein discusses the corruption of science, including his own experience in trying to bring his findings to the attention of the general scientific community. These findings would jeopardize the protocols used in testing drugs, and it is crystal clear why they would be resisted. The pharmaceutical companies operate under a protective umbrella provided by the FDA, which infuses perverse incentives in the system. Weinstein's findings would jeopardize previous FDA approvals and probably cost the industry billions. Of course, the FDA, arguably a real culprit in this process, would be immune from the consequences, but we can be sure that the political pressure to continue the process as-is is tremendous. If drugs were approved by insurance companies or some institution funded by insurance companies, Weinstein's findings would be of immediate consequence, as endangering policyholders' health and welfare is the last thing an insurance company wants to do.

Bret Weinstein is like so many leftists, including Noam Chomsky, who are great at identifying problems, and so bad at proposing solutions, which generally are compatible with the theme of more government intervention. They are completely insensitive to economic theory, and the data that cries out for more evolutionary learning and less heavy-handed, top-down, one-size-fits-all "solutions" to problems. However, he seems to be thoughtful—a real scientist—and someone who might, someday, abandon both the left and right and consequently politics with romance.
Posted by Brian J. Gladish at 4:51 PM